Verizon & IndyCar: Racing Into the Future Together

Turn back the calendar a few months and I thought, fab, the IndyCar Series nabs a title sponsor with more than 103 million retail connections, 1,700 retail locations, and $81 billion dollars in revenue--this is promising for raising the profile of the sport.

But after having recently participated in a Verizon Tech Tour, at the Indianapolis Motor Speedway, it turns out the relationship is about much more than just sponsorship. This is a real partnership. A partnership aimed at speeding both organizations into a high-technology future.

For IndyCar
They get a crack at innovative Verizon LTE Multicast. Introduced at the Indianapolis Motor Speedway, over a commercial 4G LTE network, it delivers rich, multi-faceted media content to multiple devices at once rather than sending it in a separate stream to each user.

Right. What does that mean? With a series of cameras deployed trackside to capture the cars as they travel around the circuit, combined with in-car cameras that get unparalleled views of what the drivers see, the content delivered over LTE Multicast gives IndyCar teams, using a special app, pictures and angles in real time they may have never seen before.

The ultimate goal and what's in it for you: The idea is to roll this technology into a solution for the ultimate fan experience. Large audiences in specific locations--like race tracks--would have access to the same live video and data on their personal devices that teams now have in the pits. Think of it as an evolution of the current IndyCar14 app with multiple channels of live video, and more, added. Much like the same technological amenities you might enjoy on multiple devices in your living room brought right to your seat at the race track. Fastastic.

For Verizon
They get to use IndyCar as a springboard to what clearly appears to me to be a transition from solely a mobile provider to a full-fledged tech company. 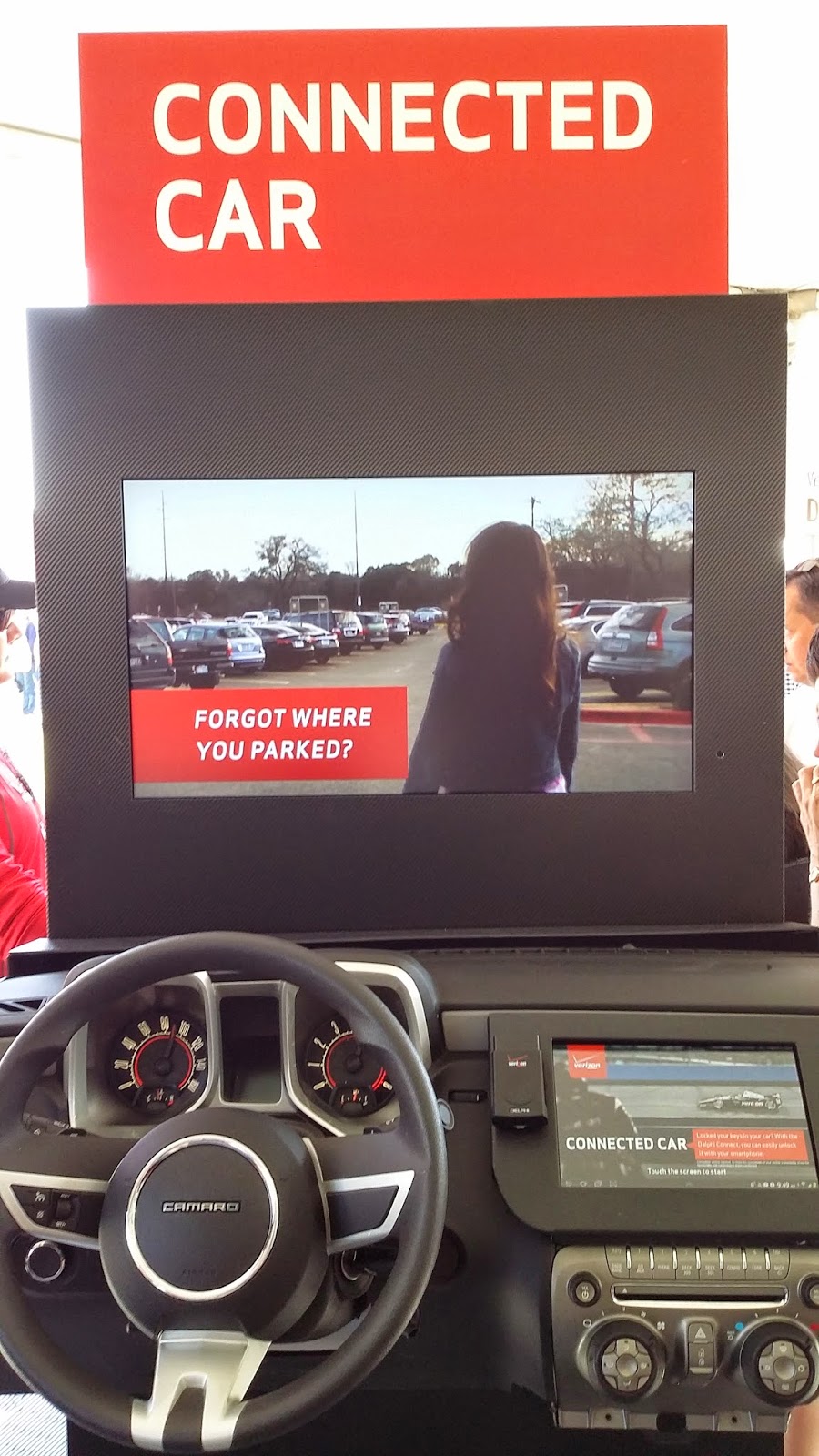 So there you have it. A peek behind the barriers at how Verizon and IndyCar are shaping their futures together. Things look bright.

Everyone Needs a Rookie to Root For II

This year sees a healthy class of seven newbies who have qualified to contest the world's greatest race. From a NASCAR champion, to a Russian rock guitarist and speedy upstart who grew up across the street from the Andrettis, there's a little something for everyone.

As we rev up for the 98th running of "The Greatest Spectacle in Racing," take a moment to meet this year's crop of fast learners—because everyone needs a rookie to root for. Who's your favorite? 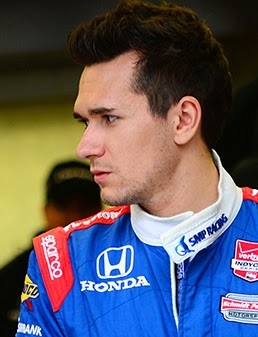 The scoop: The first Russian driver ever to compete in the Verizon IndyCar Series and the Indianapolis 500. A former World Series by Renault champion, in Europe, he had never been to the United States prior to joining IndyCar. He's shown flashes of speed, thus far, but the jury's still out. Guitarist in a Russian rock band. \m/ 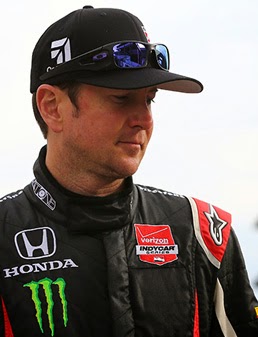 The scoop: Like a box of chocolates! A NASCAR champion, he currently drives for Tony Stewart's team, in the stock car series. Focus of much attention, this May, he's the first to attempt "The Double" (Indianapolis 500 and Coca-Cola 600 in the same day) in, like, a while. Unforgettably hateful rip on poor TV commentator, Dr. Jerry Punch, in the day, but he's been well behaved, this month. 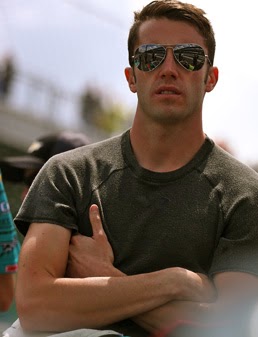 The scoop: A late add to give KVRT a 4-car Indy 500 lineup, Davison's been around: A couple of Indy Lights wins, at least one IndyCar start for Coyne at Mid-Ohio, Rolex Series, Carrera Porsche Cup, and so on. Racing is in Davison's genes—his grandfather Lex Davison won the Australian Grand Prix four times, while his father Jon raced Formula 5000. Can't speak to current status, but he once dated Tony George's daughter, Lauren. 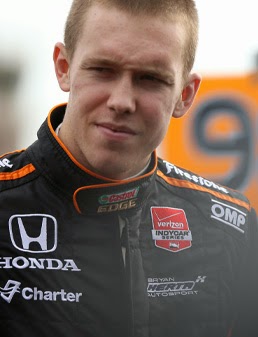 The scoop: Coming off an admirable season of Indy Lights, he was the surprise pick of Bryan Herta for a full season of IndyCar competition. So far, so fast. The kid appears to be good. Here's one: He was so convinced he wouldn't have a race ride for 2014, he nearly tapped out and got his personal trainer's license. Rich, old-world accent... 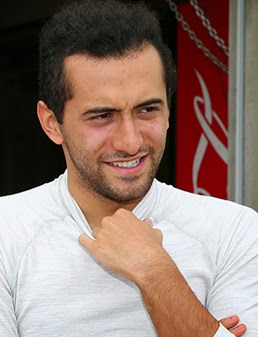 The scoop: Tested by Panther Racing, then picked up by Dale Coyne, when Panther folded, he's one of four Colombians in this year's '500' field. Four IndyCar starts to his name, a lone top 10 is the highlight. Once drove for a team owned by Formula 1 superstar Kimi Raikkonen. Such a media darling, reckon I've never heard him speak. 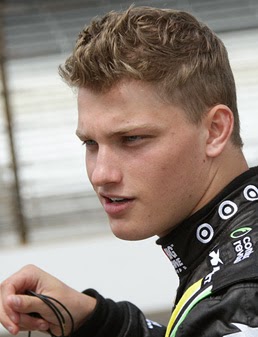 The scoop: High school senior—that's right—Karam is hot off a 2013 Indy Lights championship. His notable performances for Chip Ganassi's sports car program have him in a development deal with the owner, but with four cars already in the Ganassi IndyCar stable, Karam's been farmed-out to Dreyer and Reinbold for the '500.' Sage dates former Indy car driver Gil de Ferran's daughter, Anna. 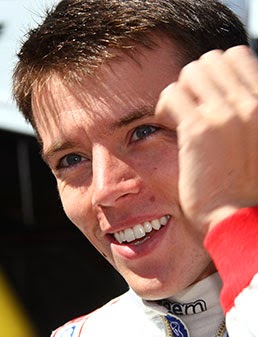 The scoop: The wee Brit stepped out of the sports car shadows to contest the Indy Double of the Grand Prix of Indianapolis and Indy 500 for the legendary SuperTex. He's had a total of four IndyCar starts, with unremarkable results, but has claimed a 24 Hours of Le Mans class win and FIA World Endurance sports car championship. By all reports, a likable chap. Married to a former Miss Indiana and likes to be called, "Marty." [part of that statement is true]

Is an IndyCar driver coming to your town?

In my case, YES. Tomorrow, Tuesday May 20th, Pippa Mann will pay me a personal (well, not actually) visit in the great city of Cincinnati, Ohio.

The other Indy 500 drivers will also fan out over North America to spread the good gospel of the world's greatest race and IndyCar.

Check out the graphic, below, to see if one will be near you.

There's a lot more than bragging rights and a cozy starting position on the line for Indy 500 qualifying, this weekend.

It's about points. Lots and lots of Verizon IndyCar Series Championship points.

Take a look, and don't miss a minute of the action.

Have a better IMS experience and share it easier

I hear that loud and clear. You?

Recently, IndyCar Series title sponsor, Verizon Wireless, offered a special sneak preview, to tech and track bloggers, of the myriad upgrades they've made at the Indianapolis Motor Speedway, to enhance the fan experience.

Following is a summary of highlights, along with a handy glossary of terms.

Verizon is enhancing the fan experience through the power of our 4G LTE network by adding significant upgrades to the Indianapolis Motor Speedway for the month of May.

IndyCar and Verizon have teamed up to deliver innovation and performance for the Grand Prix of Indianapolis and Indy 500 and throughout the series, ensuring a winning experience for fans at the races and across the country.


What it means for customers and visitors to the Speedway:
Verizon is delivering a superior customer experience on the nation’s largest, most reliable wireless network to fans, drivers and officials at the Indianapolis Motor Speedway.

Spectrum: Radio frequencies travel over the air via spectrum, providing invisible pathways for wireless signals – everything from commercial radio programs and cellphone calls to data transmissions and the signal that allows you to change the channels on your TV with your remote control from your couch.

AWS (or AWS-1) means “Advanced Wireless Services” and is the name of one of the wireless telecommunications spectrum bands used by Verizon Wireless to deliver mobile data services, video and messaging over the air. Verizon Wireless uses AWS spectrum to supplement its existing 4G LTE service, which also uses the 700 MHz spectrum band originally deployed in 2010 when the company first introduced one of the world’s first commercial LTE networks – the largest in the U.S.

Carrier aggregation allows a wireless provider to operate two spectrum bands as one so that smartphones, tablets and other devices can take advantage of airwaves on either band at the same time. By combining the spectrum of Verizon Wireless’ 700 MHz and AWS bands as well as any future spectrum as one asset, carrier aggregation increases the network’s ability to provide consistent performance along with increased capacity.

LTE Advanced is a combination of more than 15 network enhancements and performance features that are designed to create greater performance and capacity on 4G LTE networks in the future. Two of the more important features are carrier aggregation and heterogeneous networks. Engineers at Verizon Wireless today are beginning the work of deploying these capabilities around the U.S.

Heterogenuous network describes the complex interoperation among macrocell, small cell, and in some cases WiFi network elements used together to provide a mosaic of coverage, with handoff capability between the different network elements.

DAS (Distributed Antenna Systems, sometimes pronounced “dass” as in “pass”) are networks of cables and antennas that can be installed in high-traffic areas – stadiums, convention or shopping centers, office buildings, train stations, airline terminals, and even dense, outdoor urban areas such as midtown Manhattan – to create additional capacity when many users are accessing the wireless network at peak times. Verizon Wireless installs many DAS systems to provide additional capacity where it is needed, including one for IndyCar fans at the Indianapolis Motor Speedway.

Small cells: Small cells are like mini cell towers, smaller scale units generally deployed on lamp posts, utility poles and building walls to relay cell phone signals through fiber optic cables. Small cells are used primarily to enhance localized capacity and coverage where there is concentrated traffic, such as in a business district, shopping mall or a college campus. 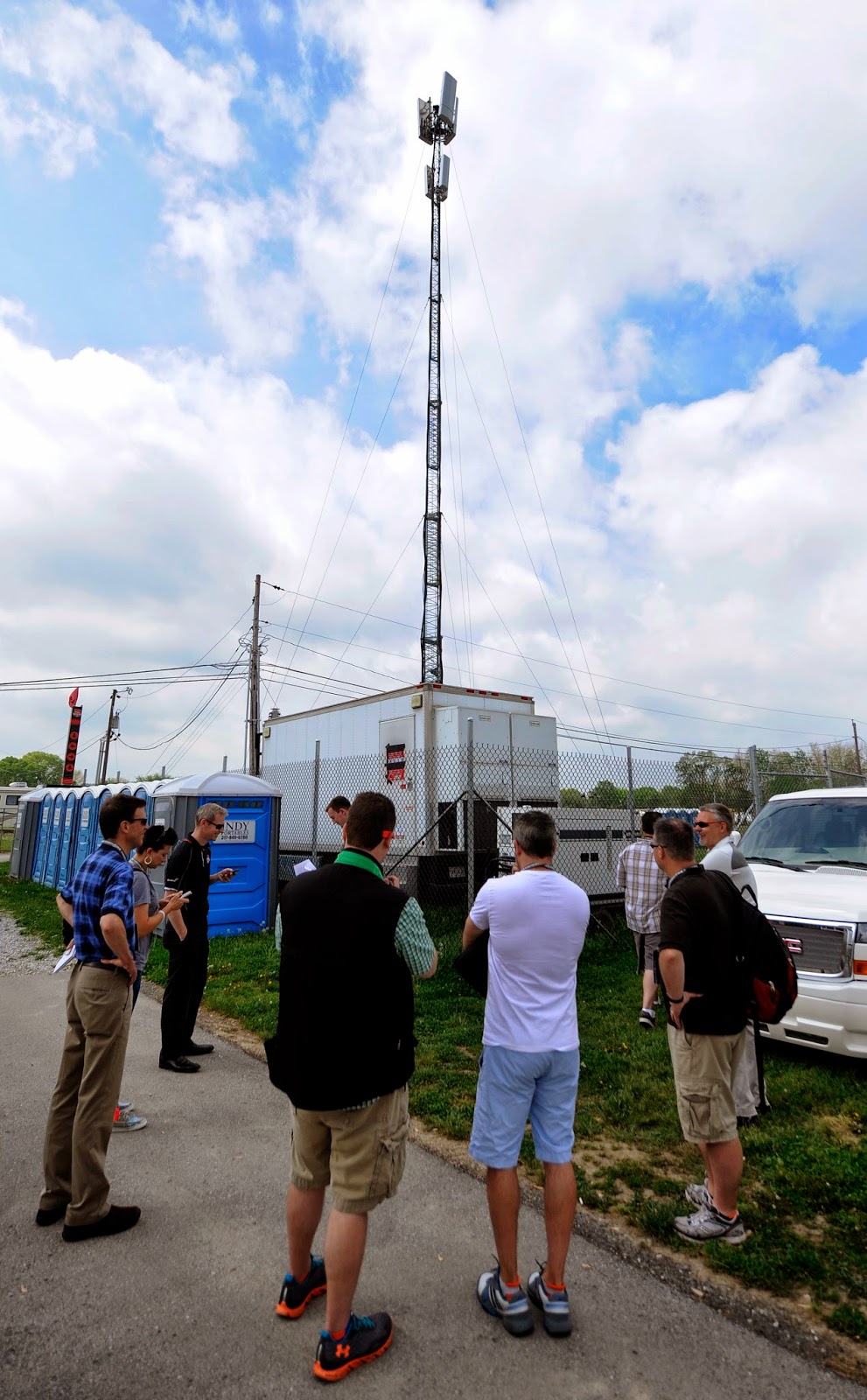 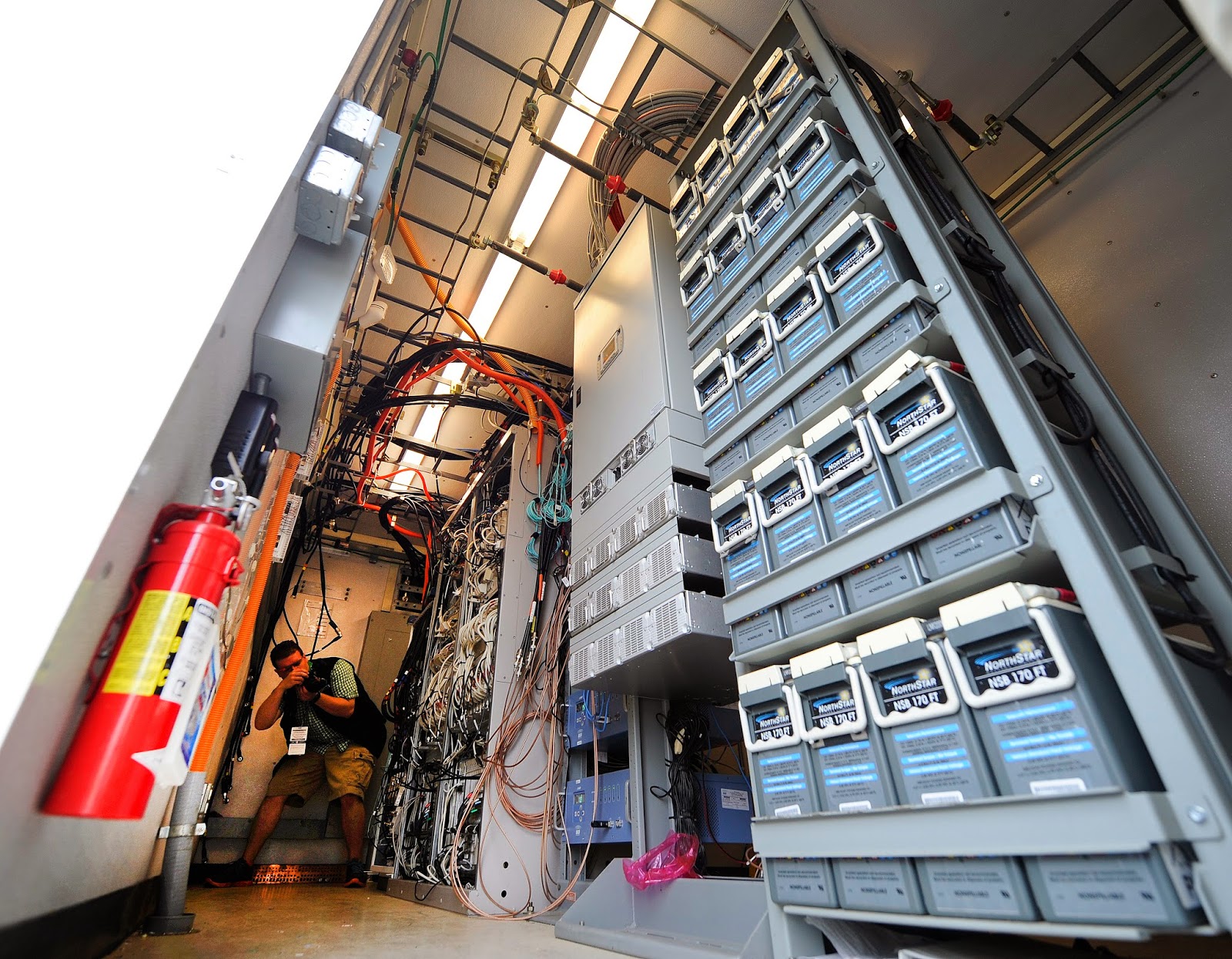