A Backstage Conversation from the “State of IndyCar” Address

FILS Dude #1: [angry] “No. DUDE. You are NOT on confetti. And if you didn’t call his rep and I didn’t call him that means they have no fu**ing clue about what is... [stops abruptly]

LOOK. Forget it. He’s about to make the announcement, and we’re completely fu**ed. Get back! I’m doing the confetti.”

[Moments later (in a biblical downpour of diced paper) Roger Bailey, Executive Director of the Firestone Indy Lights Series, announces that 2010 Star Mazda Champ, Conor Daly, will be stepping up to FIL, sharing driving duties for next season with USAC scholarship winner, Bryan Clauson—participating in the road/street races that Clauson does not take part in.]

Okay. So the conversation may be something I conjured up, but the announcement of Daly’s ride, and the fact that he didn’t know a thing about it, was NOT [insert favorite farcically-induced acronym here; ROFLMAO]. Here’s the proof: 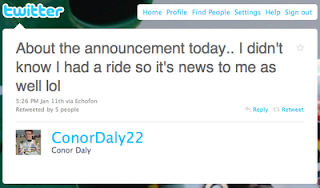 Now, you might think this would be stellar news for Conor but, ruh-roh, PROBLEM. It’s no secret that Daly has his eyes set on Formula One, which means the next logical step for him is Europe’s GP3 Series.
Did Conor already have a GP3 deal done when the announcement came? Was he set to do some FILS races with a team other than the one associated with Clauson’s scholarship? Who knows... since the above tweet, Conor’s been pretty quiet on the subject, so we’ll have to see how this one plays out.
Regardless, this is one wickedly funny episode in the life of a race car driver.
Stay tuned...
—JM
Posted by Chris at 2:10 PM