Hi, doc, thanks for seeing me on short notice. Love the new wallpaper. Do you mind if I lie down?

You know I'm a big fan of IndyCar racing, right? You remember... we had that long chat about Paul Tracy not getting a ride? 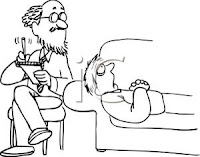 Well, anyway, I've really been struggling, lately. IndyCar is the only sport I follow, so maybe I'm just too close to it, but sometimes I really find it difficult to enjoy.

I mean, there are a lot of fantastic things about the sport, but sometimes it feels like I'm riding a roller coaster: that thrill and anticipation of climbing up the steepest hill followed by the uncomfortable moment when your stomach drops out—but it's over and over again.

I feel like I'm walking on eggshells. I thought it might help to jot a few things down, so I brought you a list. I tried to think of everything that has happened in recent memory that has given me those odd feelings. Here you go. Tell me what you think.

Is it me? I don't know, doc. I tend to put the blame on myself a lot. And the truth is, no matter what happens, I'll probably always follow IndyCar, but I just want to enjoy it, without all that other stuff. It feels laborious, at times. I can't imagine that baseball fans go through this, can you?

I guess it'll all sort itself out over time. In fact, I'm sure it will. I feel better just having gotten it off my chest. Thanks, doc.

Editor's Note: This is NOT an "everything that's wrong with IndyCar" hit piece. What it IS is me working through some things. If you've been around here for any length of time, you know I tend to keep things on the positive tip. But sometimes it's just flat-out hard to be a fan. There's a lot to love about IndyCar, and I believe it's here to stay—and so am I. Thanks for the group therapy session, peeps.